Both USER and Thermolabile USER II enzymes generate single nucleotide gaps at the location of uracils. These enzymes are useful in various applications, including cleavage of NEBNext hairpin loop adaptors, degradation of second strand for directional RNA sequencing and cloning.

USER and Thermolabile USER II enzymes can be used to open up the NEBNext adaptor as part of multiplex library preparation for next generation sequencing on the Illumina® platform. 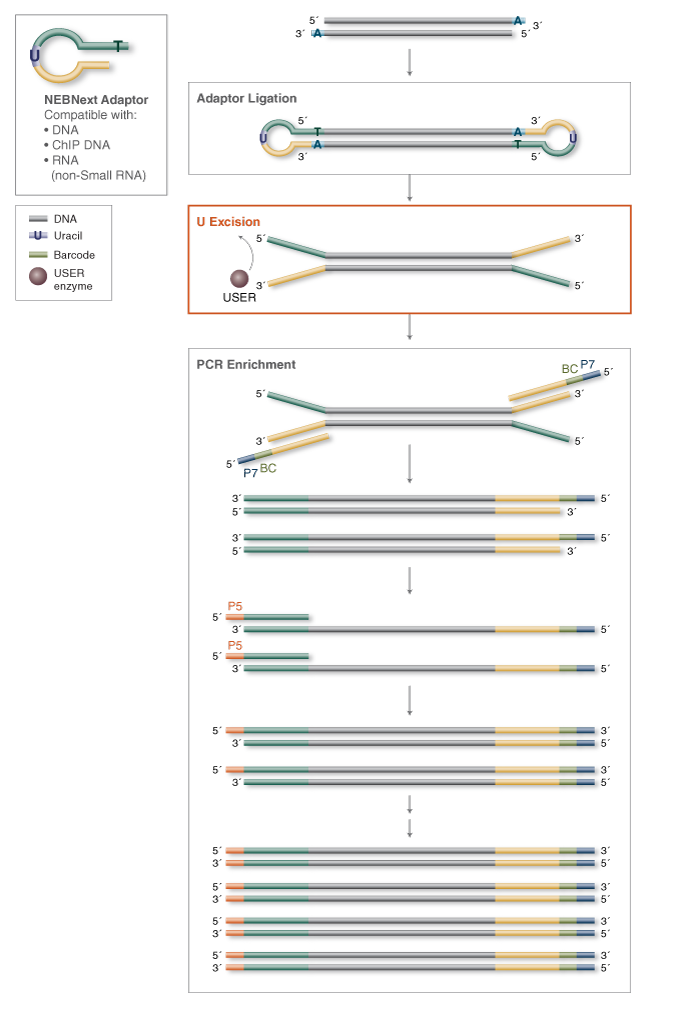 USER and Thermolabile USER II can be used in directional RNA library preparation. In the NEBNext Directional RNAseq workflow below, the dU-containing second strand is selectively removed using the USER Enzyme or Thermolabile USER II Enzyme. At the same time, if NEBNext adaptors are used, the dU in the center of the NEBNext hairpin loop is removed, opening the molecule and making it available for PCR.

USER-friendly DNA engineering and cloning was developed as a restriction enzyme- and ligase-independent DNA assembly method (1-3). The method relies on generating overlapping PCR products suitable for seamless and directional assembly of customized DNA molecules. PCR primers are designed to have 5´-overlapping sequences containing a single deoxyuridine (dU) residue that is incorporated in place of deoxythymidine (dT) at a 6-10 nt distance from the 5´-terminus. The generated PCR fragments are flanked by sequence overlaps and have a single dU residue per each DNA strand. The PCR fragments are then treated with USER/Thermolabile USER II Enzyme, which specifically nicks the dU-containing strands and generates 3´ single-stranded extensions suitable for directional assembly of PCR fragments. NEB sells USER and Thermolabile USER II enzymes for ligase and restriction enzyme independent cloning reactions. 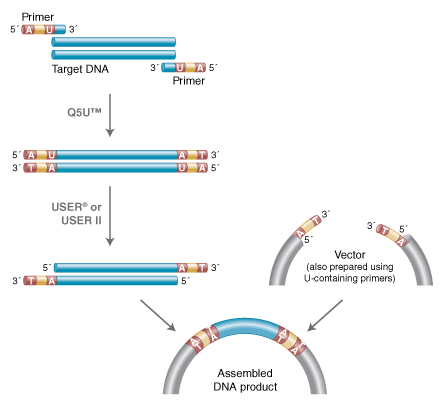 
One or more of these products are covered by patents, trademarks and/or copyrights owned or controlled by New England Biolabs, Inc. For more information, please email us at [email protected]. The use of these products may require you to obtain additional third party intellectual property rights for certain applications.